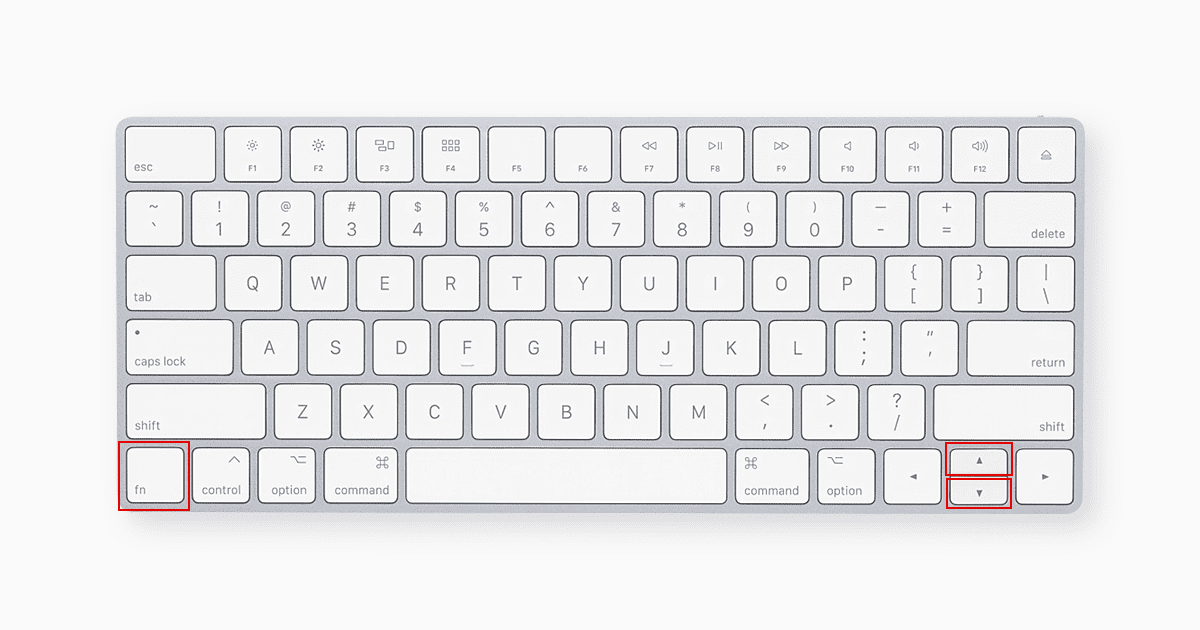 Page-up and page-down keys are commonplace on external and Windows keyboards. They allow you to instantly scroll an entire page up or down by pressing a single button. However, as you may have noticed, such controls do not exist on your Mac’s keyboard. Fret not; just because there aren’t dedicated buttons to do that doesn’t mean the functionality isn’t present.

To Page down on Mac use the shortcut keys on the keyboard. The most useful one you need to know is Fn + Up arrow and Fn + Down arrow keys. You can use it on all apps and software, such as Excel, Chrome, etc.

This article details how you can use your Mac’s page-up and page-down features. Keep reading to find out more.

Where Are the Page-Up & Page-Down Keys on Mac?

This function works on all the apps or even software you have installed on your system. Simply use these shortcuts in place of scrolling down through your mouse, which comes in handy often to get to the end of a long article or document.

Read How to Authorize Apple TV on Mac

How to Page Down on Mac in Excel

The process to page up or down in Excel is similar to the one mentioned above. Refer to the instructions provided below to see how it is done.

Does Apple Keyboard Have a Home & End Button?

The full-sized keyboard used in iMacs does have home and end buttons on the keyboard but isn’t available on Macs and other smaller keyboards from Apple. This is because Apple likes to keep its entire layout as simple as possible.

The full-sized Apple keyboard with the numeric keypad comes with these buttons. However, a much cheaper option can be to use a non-Apple external keyboard with a wired or wireless connection.

If you do not want to use a full-sized keyboard but still want to use the functionalities provided by those buttons, then you can use some shortcuts on the smaller Apple keyboard to do the same.

Read How to Change Scroll Direction on Mac

How to Use Home & End Keys on Mac?

Despite not having dedicated buttons for the Home & End keys, Mac has shortcuts to emulate those keys’ functionalities.

To use the Home key, you can use the Fn-Left arrow; if you want to use the End key, then use the Fn-Right arrow shortcut. All you need to do is to hold down the function key while using the left or right arrow keys.

Why is my Mac’s Keyboard Not Working?

It can get severely frustrating when your keyboard stops working suddenly. Macs are usually known for their reliability and good quality. However, they are not immune to problems like these.

There can be several reasons why your keyboard might not be functioning properly. When Apple unveiled the butterfly keyboard, there were several complaints about the durability of the keyboard.

Apple designed the butterfly keyboard mechanism with a minimal switch as slim and elegant as a butterfly. However, this made the keyboard very fragile and prone to breaking down.

You can fix keyboard-related issues by cleaning the keyboard using compressed air, deleting any recently installed applications, and updating macOS.

Read How To Stop Finder Action on Mac

Despite carrying the same name, there are certain differences in how the Home and End buttons function on a Mac compared to a Windows PC. In Windows systems, when you use the Home key, it usually brings the cursor to the start of that line, and the End key moves the cursor over to the end.
However, when you use the Home and End keys on Mac, it will bring the cursor to the start of the endpoint of the entire document.

2. How to Scroll Down Using The Spacebar on Mac?

Did you know you could also scroll down a document using the spacebar on your Mac? This is helpful when you want to get to the bottom of a page or document quickly. However, since it jumps from page to page, you won’t be able to fine-tune the scroll like you would while using the trackpad.
All you need to do is hit the space bar, and the page will scroll down a couple of paces; it is also great if you want to reach the bottom of a page quickly. If you’re going to scroll upwards, hold down the Shift button and press the Spacebar.

3. Can I Scroll Sideways on Mac?

For example, you can use the trackpad and even the space bar if you need to get to the end of a webpage or document quickly.

Robert is a tech expert (with more than 10 years of experience in using mac os and iPhone) who loves to help others learn about the Mac operating system and iPhone. He provides helpful tutorials on how to use Mac OS, tips and tricks for getting the most out of your Mac operating system, iPhone tips and tricks, and more. He’s always up for a challenge and enjoys learning new things about his favorite OS. When he’s not helping people get the most out of their technology, he enjoys spending time with his wife and two cats. Check out more.