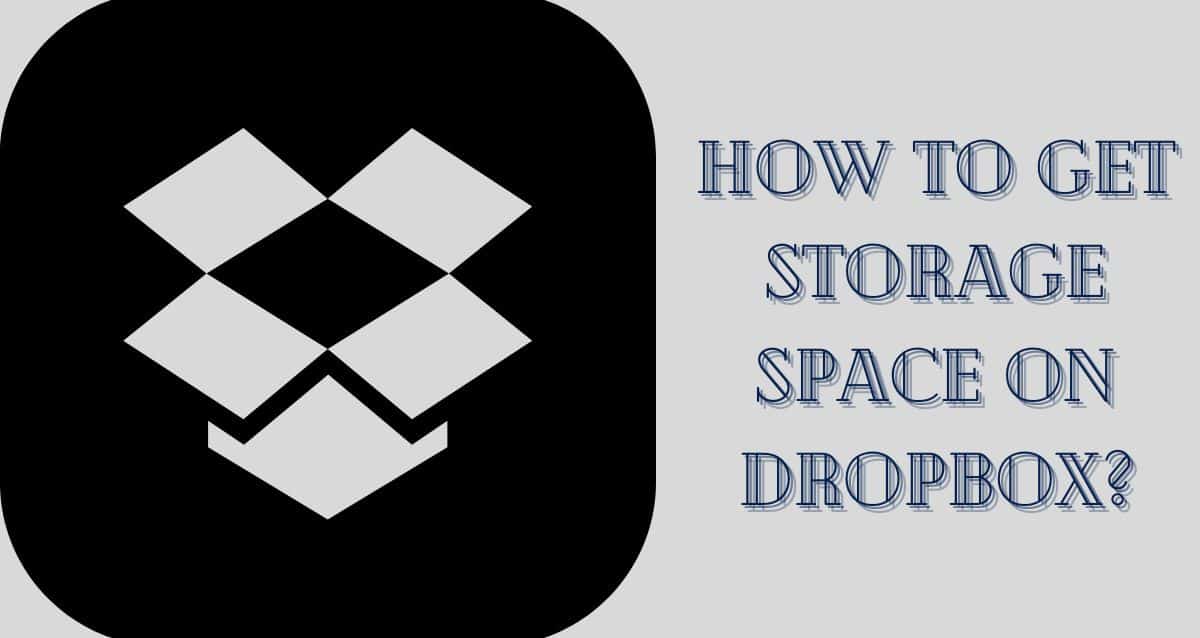 In this article, let’s see how to get more space in Dropbox for free. And also, how much space does Dropbox upgrade provide.

Dropbox provides a basic storage space of 2 GB which was not enough for me. So, I had to upgrade to options like Dropbox Plus, Family, Business, and Professional to gain extra space in Dropbox.

After doing much research regarding how to get free extra storage space in Dropbox. I have come up with a few tips, and by completing the tasks we can get extra space in our Dropbox for free. To know more about Dropbox you can also read the Advantages and Disadvantages of DropBox (You will ever need)

Here, I have explained about what are the easy ways to get extra storage in Dropbox for free. Also how much space we can get after upgrading the Dropbox?

Get More Space on Dropbox for Free

To get more free space on Dropbox complete 5 out of 7 of the Get started checklist or refer friends, family, or colleagues to get extra space on Dropbox for free. Sharing folders with other Dropbox accounts is not considered a referral.

If you have recently bought or downloaded Dropbox on any of the below-listed devices. Then you are eligible to redeem free promotional storage space in Dropbox.

How to Redeem Promotion in Lenovo Dropbox

After purchasing a Lenovo device, we should claim the promotion in 1 year. After 1 year the device is not eligible for the free storage space promotion in Dropbox.

The promotion can be earned only once for one Dropbox account. The additional storage space of 100 GB in Dropbox is valid for 1 year from the date of redemption.

After 1 year the Lenovo Dropbox will be left with basic 2GB storage space. The promotional space in Lenovo Dropbox cannot be transferred once redeemed.

Belarus, China, Cuba, Iran, North Korea, Russia, Sudan, Syria, the region of Crimea, or any other countries that do not have Dropbox service.

How to Redeem Promotion in Dell Dropbox

To know the duration of Dell Dropbox promotion, and to know whether it is available to existing Dropbox users. Check the table below:

The promotion for free Dropbox storage in Dell can be gained only once. The promotional space cannot be transferred once redeem in Dropbox.

Promotions are not available in countries like Cuba, China, Iran, Syria, Sudan, North Korea, and the region of Crimea.

How to Redeem Promotion in HP Dropbox

The HP device should have Dropbox pre-installed to claim the promotion.

To know the duration of promotion validity in an HP Dropbox account, and whether the existing Dropbox user can climb it. Refer the table:

The promotion can be earned only once for one HP Dropbox account. The promotional space cannot be transferred once redeemed in Dropbox.

Countries like Cuba, China, Iran, Syria, Sudan, North Korea, The region of Crimea, or any other country or region prohibited by law are the promotion non-available places.

How to Redeem Promotion in Upwork Dropbox

To redeem promotion in Dropbox Upwork

This promotion is for a single Dropbox personal plan account of 20GB for 6 months from the date of redemption.

After 6 months of the redemption period, the plan expires and the basic storage space will be provided. The user can claim only once in a single Dropbox account.

Those who have Dropbox in teams are not eligible for this upwork promotion.

This plan is not eligible in countries like China, Cuba, Iran, North Korea, Sudan, and Syria.

How to Redeem Promotion in Pixlr Dropbox

To redeem promotion in pixlr Dropbox:

This promotion is for a single Dropbox personal plan account of 25 GB for 6 months from the date of redemption.

The user can claim only once in a single Dropbox account. After 6 months of the redemption period, the plan expires and the basic storage space will be provided.

Promotions are not available in countries like China, Cuba, Iran, North Korea, Sudan, and Syria.

Why can’t I Redeem Dropbox Promotion

Some reasons why can’t we redeem the promotion in Dropbox space:

Nowadays, referring apps to friends and family members is majorly on-trend. This action can get us access to lots of free features in various apps such as storage space in Dropbox.

The invite can be sent to many friends but only 32 can join using the invite, a total of 16 GB can be gained by referring.

When we answer the questions in the Dropbox community. The answer we provide gets likes or is accepted as a solution by the people who post the question and earn a Mighty answer badge.

By earning this badge we can get an additional 1 GB of free storage space in a Dropbox account.

Give Feedback about Dropbox

Fill in the Tell us why you love Dropbox. There will be a maximum of 90 characters limit to tell your opinion about Dropbox.

Dropbox allocates 125 GB of free space in the Dropbox account for writing feedback about its cloud storage.

Dropbox has a Carousel to store photos and videos. Carousel is a media gallery in Dropbox that is faster and easier to view Dropbox videos and photos. Start using the carousel and get free 3GB storage space in the Dropbox account.

Use Dropbox on Samsung Device

Use Dropbox on HTC Device

If you own an HTC device or in the future will own it, Dropbox allocates free 23GB storage space for some of the versions like 4.0, 4+, and 5+. This can be claimed if the device comes with Dropbox installed.

How to Get More Space on Dropbox

The basic storage space provided by Dropbox free is 2GB. In the free version, we can share the files to a maximum of three accounts and restore earlier versions of the files for 30 days.

If you require more space we can upgrade the plan according to our needs. The plans are:

What Does Dropbox Family Upgrade Offer

In this upgrade maximum of six accounts can be connected to the Dropbox family.

We can share, protect and centralize up to a maximum of 2 TB(2000 GB) of personal information like files, folders, videos, and photos in the Dropbox family.

Individual person gets their own passwords, images, and documents for their Dropbox account.

We can choose monthly billing or yearly billing in the Dropbox family.

What Does Dropbox Plus Upgrade Offer

Dropbox plus also offers 2TB (2000 GB) like the Dropbox family after upgrading.

Dropbox Plus is used as a place to secure our best memories, ideas, and family traditional photos and videos, files, and everything forever.

Some of the features of Dropbox Plus after upgrading are:

What Does Dropbox Professional Upgrade Offer

This upgrade gives the flexibility to save PDFs or any other file type next to Google Documents. So, that all the content of the projects is available in one place and also on any Dropbox-linked devices.

It’s easy to protect your IP address and Disaster-proof our data in Dropbox Professional.

What Does Dropbox Business Upgrade Offer

Dropbox Business provides more storage space than any other plan, a total of 5 TB (5,000 GB).

Dropbox Business is considered a smart and flawless way to optimize workflow more than securing data.

Dropbox Business makes our work easier by having facilities like eSignature, document tracking, backup, and product for cloud storage and sharing.

That’s it, the end of the article, and if you require more space in Dropbox, upgrade the Dropbox plan according to the requirement.

The storage space varies depending on the plans you choose for an upgrade. The Dropbox business offers 5TB, Dropbox Professional offers 3 TB, and Dropbox plus and family offer 2TB each.

Also, try the ways mentioned in the article to get free storage space in Dropbox without paying.

Hello, my name is Lucas and I’m a Dropbox user and expert. I’m from the United States of America, specifically in New York. I love staying up to date on the latest tips and tricks, and helping others learn how to use Dropbox like a pro. In addition to being an avid Dropbox user, I also have a background in cloud storage platforms. I love creating how-to tutorials on everything from setting up Dropbox folders to automating file backups. Learn More About Me