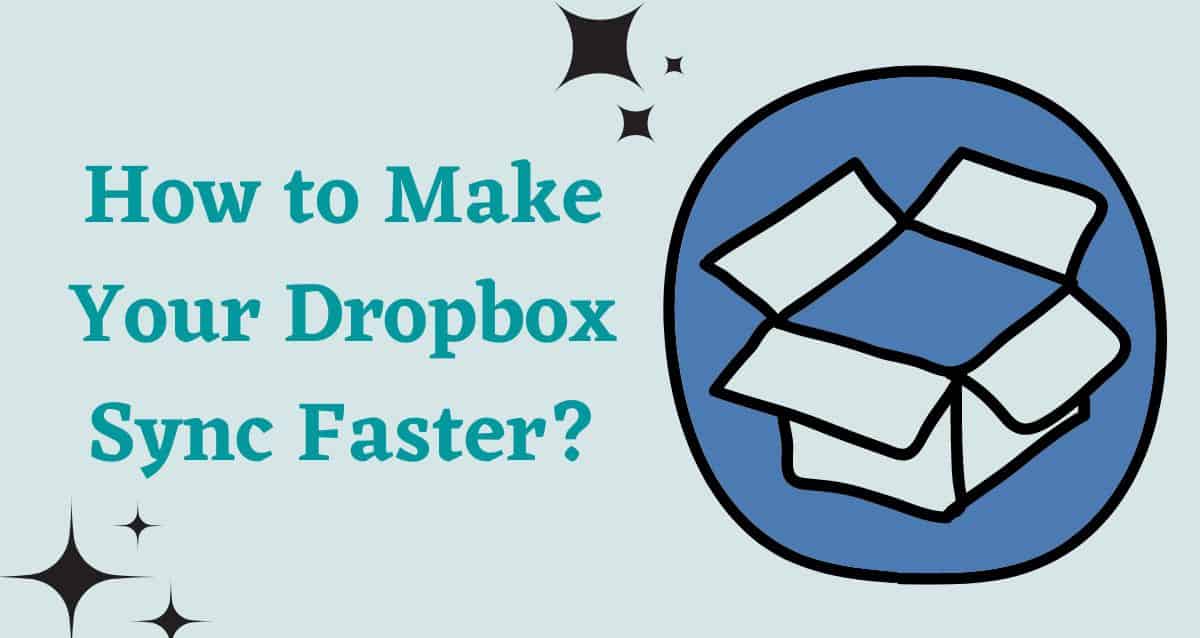 In this article, let’s discuss why Dropbox is slow during sync, upload, and download. And also I have given 6 simple ways to make Dropbox sync faster.

Dropbox is a place to store a large number of files and folders privately. Whenever I try to upload or download the data and sync in Dropbox, it consumes more time.

So I was looking at how to make the Dropbox process faster. After several references, I found some easy ways.

Here are the headings that we are going to discuss in this article:

How Long Does It Take to Sync in Dropbox

The Sync time depends on the size of the files we provide on the account. The maximum time for sync in Dropbox is 5 minutes.

If you sync the Dropbox for the first time it takes a few hours or even more time and you can cancel the sync in between if it takes more time.

The bandwidth of Dropbox is short, so while uploading files or folders, Dropbox limits its uploading speed to 75% by default from its original speed to avoid affecting the network connection.

There are a few reasons why Dropbox is taking too much time to sync.

The source provided is a heavy load. The kind of account being synced, the number of applications in the account, and occasionally the number of transactions is the major reason Dropbox takes more time during syncing a Dropbox account.

How to Sync Faster in Mac Dropbox

How to Sync Faster in Windows Dropbox

Open the Dropbox Application and click the gear icon (contains any image or initial provided).

Follow the above steps to change the bandwidth for faster sync in windows Dropbox.

How to Increase the Sync Speed in Dropbox

Consider the following strategies to enhance Sync’s performance and speed:

Follow the above points to increase the sync speed in Dropbox.

How to Solve the Dropbox Issue

The upload in Dropbox will be slow because of running multiple background apps while uploading in Dropbox. Due to poor internet or Wi-fi network connection.

Dropbox will be slow if there is a poor network. So, check the internet connection in that case.

To Fix the connection Error:

By clicking troubleshooter the desired problem will be fixed automatically.

We can restart the Dropbox process in the task manager:

First, restart the computer and then restart the Dropbox Desktop app, and Dropbox starts functioning at regular speed.

While we do a lot of downloads and uploads in Dropbox firewall and antivirus protection cause some trouble.

If other apps are running and Dropbox only faces this issue then open the security software and add dropbox to the whitelist.

Also, check whether you have provided all the permissions for Dropbox to run and access the internet.

The internal problem from the client is also a reason for Dropbox’s slow sync. So uninstall the Dropbox app and download it again.

The files will not be deleted while uninstalling the Dropbox app.

After installing the Dropbox app it starts syncing at the normal speed.

That’s the end of the article and I hope you got the solution regarding why Dropbox is slow during sync, upload, and download.

Limit the quantity of information sent during Sync. So that the speed of the Dropbox During sync does not reduce.

Hello, my name is Lucas and I’m a Dropbox user and expert. I’m from the United States of America, specifically in New York. I love staying up to date on the latest tips and tricks, and helping others learn how to use Dropbox like a pro. In addition to being an avid Dropbox user, I also have a background in cloud storage platforms. I love creating how-to tutorials on everything from setting up Dropbox folders to automating file backups. Learn More About Me